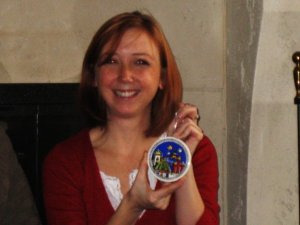 You don’t mess with me when it comes to ornaments.

THE ornament given to me by my mother each year.

Thematically gifted for each year that passes.

See? That ornament has a picture of the Country Club Plaza on it. Which is where I moved after my divorce. (Because I had always wanted to live near there. And because I could. And why wouldn’t I?)

Isn’t my mom clever? (Truth be told: she had to regift that ornament from her own tree because she looked high and low for a Plaza ornament but couldn’t find one. But STILL. It’s the tradition that counts.)

Every year. I own an ornament symbolizing every year of my life since seventh grade. 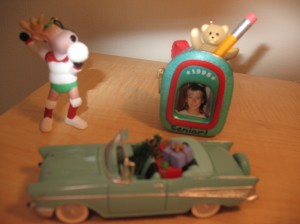 The moose playing volleyball? Eighth grade. Only I didn’t play volleyball. I um, didn’t quite make the team. But I was the manager and that is a VERY important roll….

Backpack? No, not Kindergarten. It was my senior year in high school. (Because every high school senior caries a backpack with a bear and a pencil in it.)

Corvette with gifts? I think even my mom will admit that one was a stretch. But it was meant to symbolize 2000. The year I graduated from college and struck out on my own as a reporter in Rocky Mount, NC.

But let’s not be selfish here. It’s not like my mom won’t give one to the fiance each year. This is the tradition that keeps giving.

And so, I had visions of our first Christmas tree. Decked with white lights (the only acceptable lighting in my opinion) and the lot of my sentimental ornaments.

It would be so sweet. And as the years passed, we would add to it with the ornaments collected together.

My vision was brought to a screeching halt.

Someone else had an ornament tradition. 10 years ago, a young 20 year-old bachelor decided he would enlist his buddies to help him deck out his Christmas tree.  So he did what he did best: he threw a party.

And invited all of his friends to bring him an ornament for his tree.

Oh, they brought ornaments. Every year. (hmmm….notice anything familiar?)   Some more “appropriate” than others. Most very funny and light-hearted in nature. Many hand-made, including the beloved McRib ornament. Crafted so cleverly from several boxes of the elusive McRib.

It was time to set a date for the 10th annual ornament party and we had a big problem.

How could we put my sweet little moose playing volleyball on the same tree with McRib boxes? These two traditions just weren’t going to work. We needed a solution.

Him: Well, why don’t we pick from the best of my ornaments and then put yours on too?

Me: OR, we could have a special tree for the “adult” ornaments and then have a family ornament tree?

Oh, that didn’t go over well at all.

He heard: Your ornaments are crap and need to be separated.

And so the fight began. Somehow, I missed his first offer to compromise. (I’m a little silly about listening at times.)

All I could think of was how could we manage years and years of both traditions? And what about when we have kids? Some of his ornaments might not be child-friendly. And I wanted to be sure there was room (in our lives) on the tree for children.

He threw up his hands and said we’d cancel the party.

But that’s not what I wanted. I just wanted a compromise (remember, I didn’t quite catch that first offer.)

I told him not to cry.

I’m just kidding. It was me.

And finally, in a moment of clarity, I suggested that we take the best of his ornaments and all of mine (because there are many more of his than mine.) And he laughed because it’s exactly what he had suggested in the first place.

And I ate a little crow, but it’s ok.

Because we figured out how to merge two very different traditions. And, at the same time, offering a hard-core challenge to our friends (because mine are invited too.) May the best ornaments win a permanent place on our tree.

So bring on the McRibs this year. I’ll be happy to place the best of the best right next to my little moose.